The dowtown portion of the Merrimack River Trail is a 1.3 mile long shared-used path located along the south bank of the Merrimack River in the heart of Lawrence’s mill district. The project is bounded on the west by the Lawrence Rail Trail, the Shawsheen River to the east, and on the south by large-scale, multi-story, red brick mill buildings dating to the first decade of the 20th century. Planning for the Merrimack Riverwalk Path began in 2004 when the City of Lawrence and Groundwork Lawrence started working with property owners to develop conceptual plans, overcome project obstacles, and generate support for the project. We completed title work for the corridor, surveyed the project area, prepared a dam break analysis, and completed very conceptual plans. Groundwork organized crews of young adults who cleared vegetation to create a trail corridor. These first steps were critical to creating a trail, overcoming barriers to the project, and building a partnership among property owners. A recent grant from the state's MassTrails program, match by the Lupoli Family Foundation and Fields Pond Foundation, enables Groundwork to bring together these stakeholders in a public-private partnership to take the next step in the project’s development.

When the Riverwalk Path is completed it will greatly enhance local and regional connectivity between existing and proposed paths. Near the Great Stone Dam the path connects to the 2.1 mile long Lawrence Rail Trail (currently in design and scheduled to start construction in 2023) which leads to the 3.5 mile long Spicket River Greenway and over 30 miles of developed rail trail in Methuen and New Hampshire. The Riverwalk Path also fills voids within the trail network linking the cities of Lawrence, Lowell, North Andover and begins to overcome barriers to the Shawsheen River Greenway. The path will also provide users with an exceptional experience juxtaposing the natural and the built environment. In the winter the pathway comes alive with Bald Eagles hunting and crows roosting by the thousands along the riverbanks and on the roofs of mills. In the spring the path will be utilized by anglers in search of shad, herring, and striped bass who cannot migrant further upstream due to the Great Stone Dam. The pathway will provide users with an immersive experience with long views of the mammoth mills along Lawrence’s riverfront, the Ayer Clock Tower, the four bridges, and the 900 foot long Great Stone Dam. 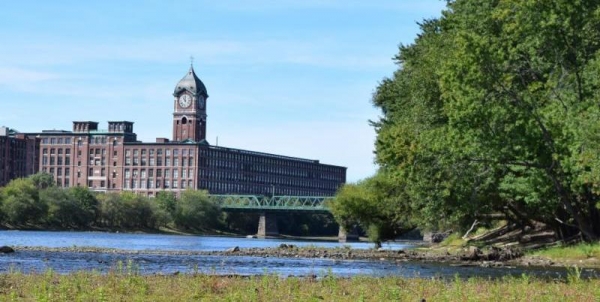